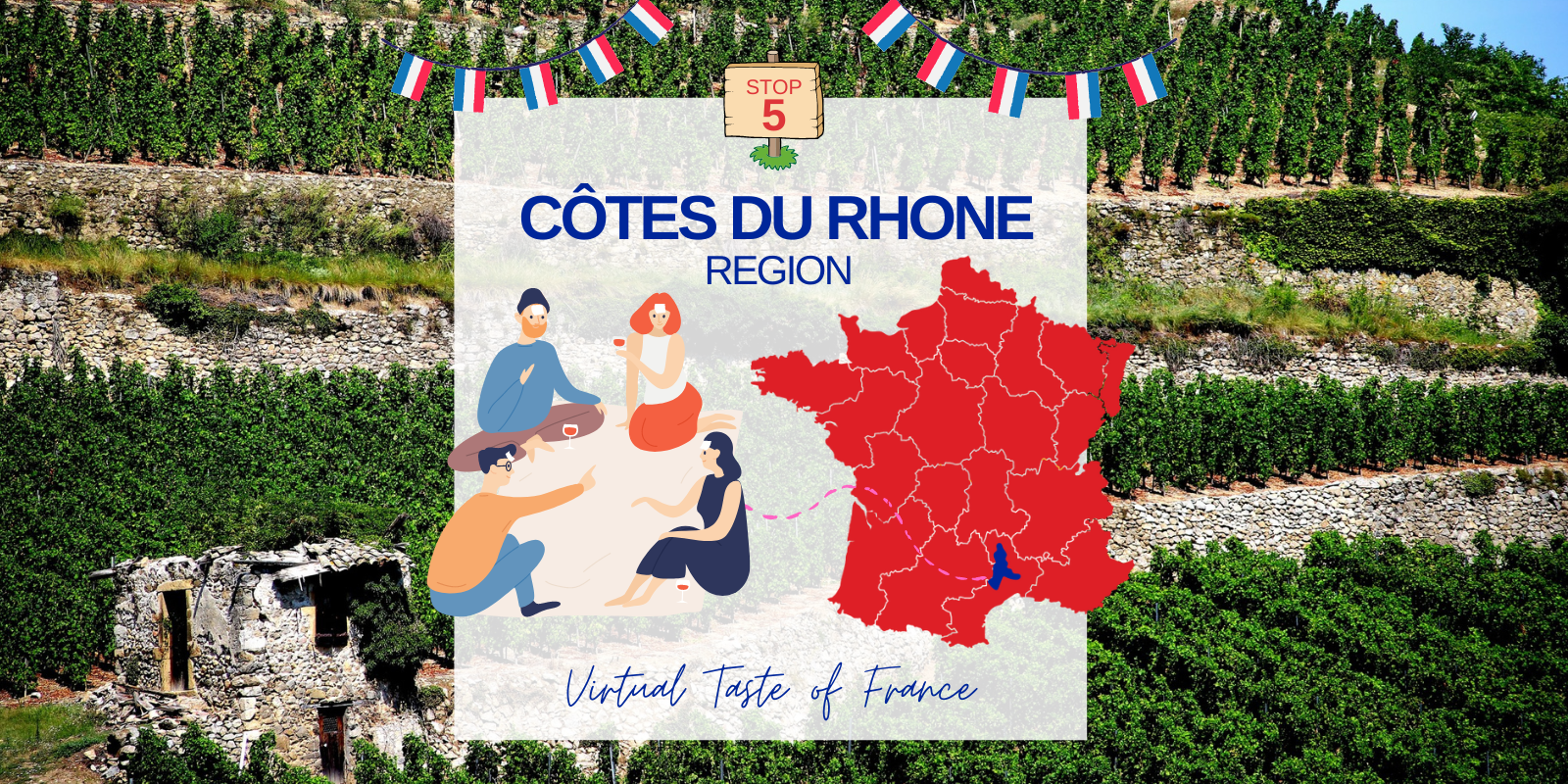 Located in the south east between the cities of Vienne, 30 km south of Lyon and Avignon, the Rhône valley extends over 200km and is home to what are possibly some of the oldest vineyards in the country. Wine-making in the region dates back to almost 2,500 years to when the Greeks founded the city of Marseille (then Massilia) and are believed to have introduced viticulture to France. The Romans arrived around the first century B.C. and continued planting more formalised vineyards starting in Vienne in the north, which was then a provincial Roman capital.

Côtes du Rhône (which translates to “slopes of the Rhône) first appeared in 1737, with a royal decree stipulating that all barrels destined for sale or transport must be branded with the letters “C.D.R” to guarantee the quality of the wine. It is split into two sub-regions – the Northern Rhône and Southern Rhône. Each share the Rhône river but have distinct climates, soils and wine style.

In the northern Rhône, the area from Vienne to Valence, vines are cultivated in a narrow area along the river on very steep slopes, sometimes in distinctive terraces supported by walls, some of them built by the Roman legionaries. Grapes are manually picked and the harvest in general requires a lot of manpower which can add to the price. The region has a continental climate – harsh winters but warm summers – and the climate is also influenced by the mistral wind blowing cooler air from the Massif Central. The dominant red grape here is Syrah while Viognier places a central part in the whites.

The southern Rhône sub-region has a Mediterranean climate with milder winters and hot summers. Here, the landscape which partly protects the valleys from the Mistral give rise to microclimates and a wide diversity of wines. No more steep slops there but gentle hills and flat land with a mix of sandy soils and typical large pebbles. During the day, the pebbles absorb the heat of the sun and keep the vines warm during the cooler, cloudless nights. Red is king in southern Rhone with Grenache at the helm, seconded by Syrah and Mourverdre, producing much powerful wines with richer alcohol content. White is making a name for itself with Grenache Blanc and clairette making the bulk of the blends.

After the fall of the Roman empire in the 5th Century, wine making across the Côtes du Rhône declined or disappeared, and it was in the southern Rhône that it re-emerged in the mid 14th Century with the help of the Catholic church. During the period of the Avignon Papacy (when seven succesive popes resided in Avignon in southeast France rather than Rome), Pope John XXII established Chateauneuf-du-Pape (literally translated as “the Pope’s new castle”), which of course went on to become one of the most renowned appellations in the region and country.

Wines from the Rhone valley are classified in one of four levels:

Côtes du Rhône AOC
These are the most common, entry-level wines and account for half the total output of the region, consisting mostly of red blends containing predominantly Grenache or Syrah grapes as well as other grapes from a list of 21 sanctioned varieties. They must contain at least 11% alcohol are generally easy-drinking, everyday red wines. Whites and rosés also are also produced and delicious, though less common.

Crus
Finally, at the top of the quality pyramid there are 17 distinctive crus of the region – 8 in the north and 9 in the south. These wines are considered to truly express their individual terroir and make up about 20% of the total Rhône wine production. They are the beacons of Rhône Valley wine and don’t need to have bear Cotes du Rhone on their label, the villages name says it all…