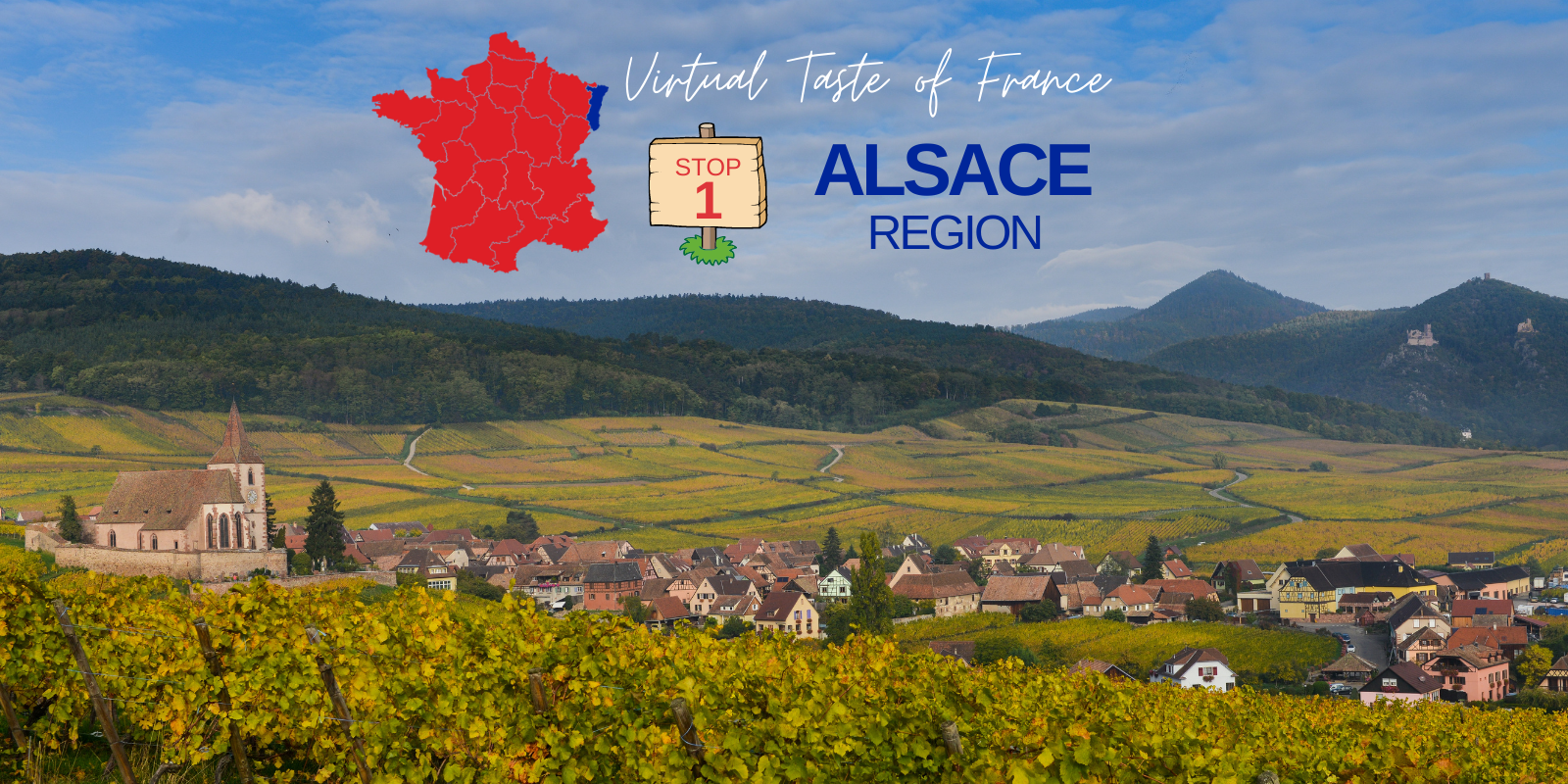 The first stop on our Virtual Taste of France is the northeastern region of Alsace.

Located along the Rhine River plane and sharing a border with both Germany and Switzerland, Alsace has alternated between French and German control over the centuries, so the mix of these cultures and influences is obvious today in their architecture, the presence of both French and German languages, their food culture and, of course, their wine.

The capital, Strasbourg, is of course the formal seat of the European Parliament and sits near the German border (the German town of Kehl is just across the river) with culture and architecture blending German and French influences.

Almost all wines produced in the region are white, with Germanic grape varieties like Riesling and Gewurztraminer most common, although in Alsace they are typically produced quite differently than in Germany. Alsace also produces Pinot Blanc, Crémant d’Alsace (an increasingly popular sparkling wine) and Pinot Gris.

Alsace is probably best known for its dry Rieslings (in contrast with the sweeter style typical to Germany), but some producers here do make wines with some residual sugar and a more pronounced fruity character. Almost all wine produced in Alsace is of AOC classification.

Alsace Gewurztraminer is closely related to Savagnin and accounts for 20% of Alsace’s output. These pink-to-red grapes are grown in almost all of the vineyards in the region, and primarily used to make off-dry wines that are incredibly aromatic and typically have a bouquet of lychees.

Pinot Gris is made from the same grape as Pinot Grigiot (both names translate as “gray”. These unique grapes are neither black nor white, and instead have a pinkish-grey hue .The variety has been present in Alsace since at least the 16th century, and is made in dry, off-dry and sweet styles.

A distinctive feature of wines from the regions are the tall bottles – called  flûtes d’Alsace – which are a legal requirement for bottling here.

Our Alsatian wines all come from Bestheim whose history begins in the village of Bennwihr, home to the “Moon Chasers” (“Mondfangers”  in Alsatian), courageous winegrowers who have passed on their know-how from generation to generation, in a legacy that has spanned the centuries. Cave de Bennwihr was founded in 1946 and became Bestheim after merging with the Cave de Westhalten in 1997. Three more successive mergers later, the group now compries nearly 450 families of dedicated winegrowers who between them cultivate 1,350 hectares of vines in the north and south of the region.

Below are the Alsatian wines that we stock at The French Market. Click the links below to read more about each individual wine:

Our range of Alsace wines from Bestheim: